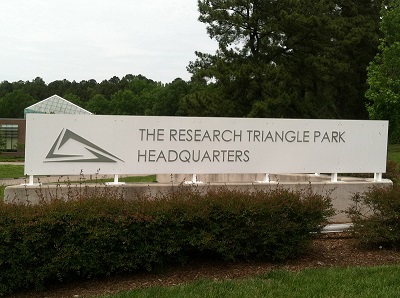 RTP grew from a concept to a reality under the leadership of Governor Luther Hodges and a fundraising effort that amounted to over $1.4 million. Its first tenant, The Research Triangle Institute, is still in operation as the fourth-largest non-profit contract research organization in our nation.

Another 100-acre piece of land, known as the Triangle Service Center, Inc., is parceled out to commercial for-profit operations, such as the Radisson Governor’s Inn, along with other hotels housing facilities for large corporate meetings. Included in this area are the Bank of America, Wachovia Bank, and The Triangle Transit Authority. Off of Alexander Drive lie a series of buildings leased to several small to mid-sized companies.

Surrounding the park itself are numerous places to dine. Whatever cuisine delights you can be found within a short drive from your office, hotel, or residence. A virtual plethora of choices await guests, consisting of American, Caribbean, Chinese, French, Indian, Italian, Japanese, Mediterranean, as well as Mexican fare.

A world within itself, the Research Triangle Park awaits your visit as you discover why so many recognize this area as a small megalopolis of industry and commerce.